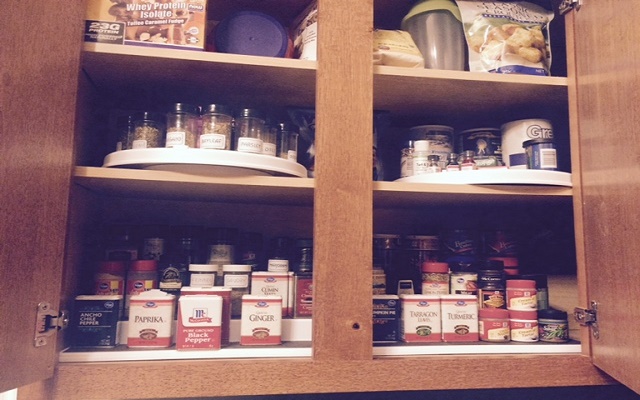 If you’ve been following my adventure to get my spice cabinet organized, then you’ll be glad to hear that my project is finally completed.

Note: I mention some of the organizers I personally ordered for my project. The links are affiliate links. If you plan to order an organizer, please consider using the link to help support Crabby Housewife. I only recommend items I’ve personally used and find superior.

Instead, I broke it into two pieces and threw out the legs that convert it into a two-tier setup. Now, I have one circular holder that does not spin and one that does. I chose to put the additional spices I wanted to get off my counter on the spinning one as I use those the most and I put extra containers of salt and food dye on the one that does not spin as I use those very infrequently.

Here are some tips that will help you organize your spices. These are things I learned along the way.

What to Do If You Have Multiple Jars of Spices 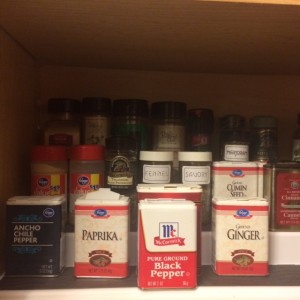 Have more than one can of the same spice? I tend to stockpile and I had two black pepper cans, two cinnamon, etc. First, make a commitment here and now that you’re going to stop buying way ahead of what you need. There is only so much room to store things and there really isn’t a reason to have three of the same spice as they take a long time to use up anyway. More than likely, the spice will grow stale on you before you use it.

Next, see if you have just a tiny bit left in any of the containers. You might be able to combine containers so you only have a single one instead of two or three. I was able to do this with my garlic powder. I had a tiny bit in one jar, so I just poured it over into the other and threw the empty jar away.

With the black pepper tins and the cinnamon tins, I was able to stack two cans on one shelf. As I empty the one, I will change this by not stockpiling so much at once.

As you can see from the pictures, my spice cabinet looks 100 times better than it did. You can actually see what is in there and not have things falling out on your head when you reach for something.

Keeping it organized can be a bit more of a challenge. I’m going to insist that people put things back where they get them and only take out one item at a time so there is no confusion. Also, when I have to replace a spice, the canister will need to be the same size as what is currently there. Otherwise, I risk things being too tall to see around or having to reorganize. No worries, though. You can always empty a new container into an empty old container.

I wish you the best of luck with reorganizing your spice cabinet. It is a big job, but it is so satisfying to see the end result and it makes cooking much easier. 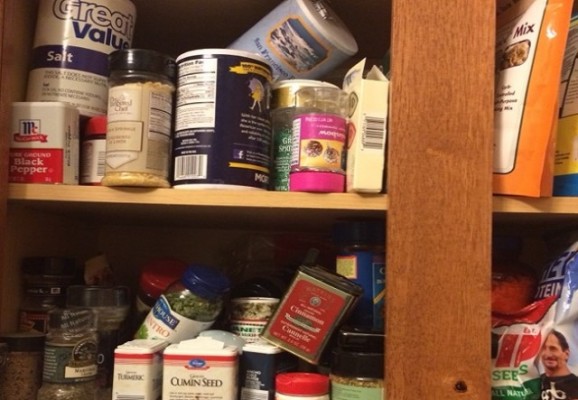 We have been doing some decluttering recently. With any house, after you live there a few years, things just collect. We’ve been here 11 years, so we’ve collected a LOT of clutter over that time – again. My first project in 2016? To organize my spice cabinet.

I have a ton of spices. I like to cook. I like to try  new things, new spices, new creations. However, that also means my cabinet looks like the picture above. Yep. It is rather horrifying. In addition to that, I have a round spice holder on my counter top that I’d like to get rid of because my kitchen counters need to be decluttered as well.

I thought you might enjoy sharing this journey with me as I explore the best way to get this cabinet organized. I’m sure many of you are suffering from messy cabinet syndrome as well, although likely you are more organized than the picture above. This is my cabinet at its worst ever.

So, the first step is cutting the clutter. When it comes to spices, they do have a shelf life. In addition, when I bought my spice rack, it came with some blends that I never use or rarely use. It’s time for them to go. Yet, I love the little round spice jars the set came with, so I will be keeping those to put some of those canned spices in.

Things that can go:

Now that everything is inventoried and things thrown away, I will move on to Step # 2 – choosing organizers. Check back tomorrow to read more about my spice cabinet organization adventure. You can also sign up for my newsletter to get updates on new articles each Friday straight to your email box.

FREE Copy of “Keto on a Budget” When You Subscribe

Get Your Young Living Starter Kit

Gain access to Lori's private tips group on natural living and earning money selling YL or sign up just to get a discount on what you use for yourself.